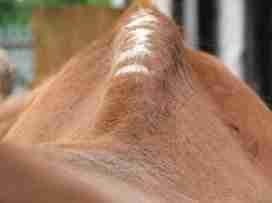 A horse that goes around with his head up, ears pinned, and tail swishing could be indicating discomfort or displeasure for any number of reasons. One that’s commonly overlooked, however, is poor saddle fit.

When professional saddlers evaluate a horse’s saddle, they look for telltale signs of a poor fit in the horse’s body, behaviour, and movement.

Keep in mind that many of the signs described can result from issues other than (or along with) saddle fit, and it can be difficult to differentiate poor fit from an unrelated physical issue. This is an important reason to also confer with a veterinarian. 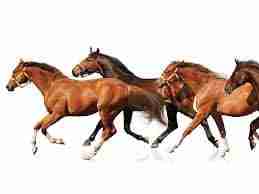 Horse anatomy in Motion Please leave this field empty All Around fully tooled Create that dream saddle that will make you and your horse shine. Sign up to receive awesome content in your inbox, every month, and a discount on your next purchase We don’t spam! Read our privacy policy for more info. You are…

How do you know if your saddle fits correctly? When you start assessing the horse, rider and saddle most people are unaware of signs of soreness and saddle fitting problems. The rider could have had riding issues for years and not realized it could be because the horse is sore. The instructor could be constantly… By Alexandra Beckstett, The Horse Managing Editor  If you’re a runner, you’ve probably noticed that after a 45-minute jog your calf muscles seem a bit swollen or enlarged. They are responding to post-training fluid shifts, fibre hypertrophy (thickening), and the general strain of exercise. Horses’ muscles, particularly along the back, respond to exercise in the… Understanding Saddle Fit, Part III: Is It a Fit? Correct saddle fitting is as important to the equine athlete as correct shoe fitting is to the human athlete. The present design of saddles has been primarily for the comfort of the rider; riders want close contact with the horse. However, in trying to achieve that… DVD featuring Dr. Joanna Robson Too often people don’t recognize horses in Pain. Short and choppy strides, loss of topline muscle, bulging shoulders, hollow-back – these are all symptoms of a horse in pain. “Stall Rest and Bute” is mistakenly the treatment when the underlying cause cannot be found, and joint injections don’t treat the underlying cause…